Assisting Caregivers with the De-Escalation of Challenging Behaviors

Throughout my time as a special education teacher and administrator, I have always searched for ways to help my Autism Spectrum Disorder (ASD) students de-escalate themselves without having to get to a point where the use of a protective hold was needed. This was, at times, a herculean feat because of the level of dysregulation in the student. While the intention of de-escalating my students was noble in that I didn’t want them hurting themselves or others, the outcome could sometimes cause further trauma because of how the de-escalation was done. Public education is an industry that can be slow to change and adapt to what the stakeholders (students and families) need. This is especially true since the start of the pandemic and was definitely an issue prior to the start of the pandemic and the shutdown of schools. I realized that I needed to expand my knowledge of how and why dysregulation of a person occurs and how I could better help my students and train my staff so that when challenging behaviors occurred, they were dealt with in a manner that gave the utmost dignity to the person in distress. MOVIA’s robots are a useful resource for the classroom, helping children focus and grasp lessons in a non-judgmental friendly way.

I began to research and study the brain and central nervous system and joined a professional organization that helps people who deal with challenging behaviors. What I learned from my research is that the brain changes as a person becomes dysregulated. In fact, the brain gives greater control of the human body to the central nervous system which allows for a much more rapid response to perceived negative stimuli. In other words, the brain signals the body to go into “fight or flight” mode. When a person (both neuro-typical and neuro-diverse) perceives something or someone as a threat, the brain’s normal control system, the pre-frontal cortex, begins to alert an area of the brain called the amygdala that there is something wrong. From there, the amygdala tells the hypothalamus to release stress hormones which increase the body’s heart rate, energy levels, and breathing. While this is occurring, the brain’s ability to process information is decreased as compared to when there is no perception of a threat. The reality is that what I would consider a challenging behavior was really my student’s brain reacting to a perceived threat to his or her safety, whether that threat was a physical or mental one. I also learned that as I was witnessing my autistic students do this, my own “fight or flight” started to kick in because my brain was perceiving my students as a threat; my reactions to their reactions were not helping to de-escalate my students and return control of their brains to the pre-frontal cortex. I realized I was doing things that were making my students more and more anxious. To be a better educator and administrator, I had to re-learn what I was taught when dealing with autistic students with challenging behaviors.

As I began my re-learning process, I started to understand that to de-escalate an ASD student, I needed to first de-escalate myself. I needed to have a calm body that didn’t present as aggressive. I needed to use a quiet voice with a neutral tone and a slow cadence. In addition, I figured out that I needed to stay at least 3-6 feet away from a dysregulated student so that I didn’t enter his or her personal space bubble and trigger more of an aggressive response. It was hard to do at first, but over time I trained myself and the results were spectacular! Incidents with students’ challenging behaviors became less severe, shorter in duration, and did not cause any additional trauma for the student. 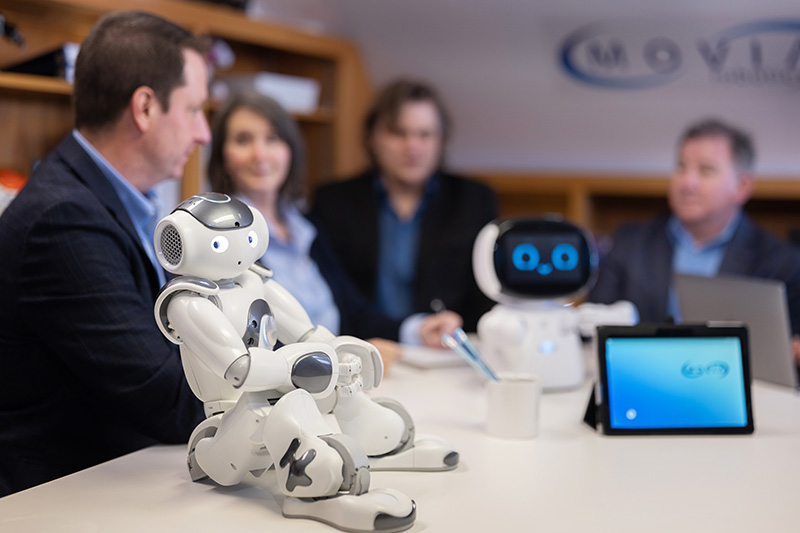 MOVIA’s educational content is developed and written by educators and therapists, and aligns with the highest standards for special education curricula.

Fast forward many years to my role at MOVIA Robotics – a collaborative robotics company helping children with Autism Spectrum Disorder and other special needs unlock the potential to learn and grow through their unique RAI technology – and I am still thinking about how to help caregivers de-escalate ASD children efficiently and effectively. We have purposely chosen robots we can program to use calm, deliberate speech that won’t agitate a child. In addition, the pace of the robot speech can be slowed down to allow for better processing of information. Furthermore, the robots do not have emotions and can’t get upset or angry, so are infinitely patient with a dysregulated child. Lastly, the robots always have a happy look on their faces which visually shows a child they are not upset.

“Students with ASD are naturally drawn to the robot.”

– Eric Spencer is an educator of over 25 years serving as a School Counselor, Dean of Students, and Principal at the high school level. Eric is the current Director of Education at Saint Catherine Academy and works with many ASD student who present with challenging behaviors.

The functions on the robots, combined with our text-to-speech function in our software, allow a child displaying challenging behaviors to calm him or herself down with respect and dignity. For example, let’s say a child is becoming dysregulated and is refusing to speak to a caregiver. That caregiver could put the child in front of a robot and type in verbiage for the robot to ask the child what is wrong or how it can help. The caregiver, facilitated by our Robot-Assisted Instruction, can help de-escalate the child in a non-judgmental way that will strengthen the bond between the robot and child. This also gives that child a sense of security knowing that he or she can talk to the robot about things that can create challenging behaviors in him or herself. This concept is so powerful because, over time, a child can learn that talking to the robot is a better way to handle his or her issues rather than having their brains switch to the “fight or flight” mode. This will generalize to stronger and healthier relationships with peers and adults, as well as help a child with academic progress as more time will be devoted to instruction rather than interventions to de-escalate. Throughout my career as a special educator, I have always sought out additional tools that can accelerate timelines to progress, improve outcomes, and, most importantly, improve the lives of those affected by autism and other special needs. I am happy to say that Robot-Assisted Instruction is one of those tools that every educator should add to their toolkit.

The COVID-19 pandemic has created unique challenges for people with intellectual and developmental disabilities (IDD). To address them, the Centers for Disease Control and Prevention (CDC) created a COVID-19 toolkit with communication resources explaining […]

A new study by researchers at the Yale Child Study Center demonstrates that puppets can attract and hold the attention of children with autism spectrum disorder (ASD), raising the potential […]

My Life Is a Work in Progress

My goal in life is to keep facing my everyday challenges. My life is a work in progress. I want to talk about how I understand things and what is […]